Arawata Lot 1 YP 174 sold at the stud’s 2018 sale in January for $46,000 and shows the clean, well-balanced style that the Somerville family breed for

John Somerville has been involved in deer farming since his father Walter acquired his first six deer while John was still at school back in 1979. “They were worth a bit of money back then,” says John.

“For a few years it was a tax dodge for people in the city which brought a wave of investment. Then when livestock tax came in in 1985 some of them left but the industry itself stabilized and matured around the venison and velvet returns.”

As the long-standing owner of a sheep stud it was second nature for Walter Somerville to keep records of his hinds and their progeny right from the start. “The deer stud ‘s been going ever since,” says John.

“Dad was keen on the velvet side of things and velvet’s one of the most hereditable traits in any animal.”They’re intelligent animals according to John, and temperament is another hereditable trait.

“If you feed them well and do it right they’re great animals to work with.” They’re clearly doing something right on the Arawata Deer Farm with their home velvet having easily doubled in weight over 20 odd years.

“Plus you can see the velvet style in the tyne placement going down the generations from father to son,” says John. “It’s pretty rewarding”.While velvet’s been giving good returns for the last six years venison has also just had its best year ever.

Velvet finds its main export market in South Korea and China while the venison has traditionally gone to Europe with an increasing share now going to the States. “A bit of competition in the market helps keep the prices steady,” says John. “We’re in a pretty good space.”

John believes the deer industry has an important part to play in New Zealand’s agricultural industry and he’s pleased to see numbers increasing again after a slump in the early 2000’s.

Around 70% of deer farms are mixed stock farms, predominantly sheep and beef, which allows them to spread their risk as well as their work loads. On the 170 hectares which he and his wife, Mel, farm down near the southern coastline of the South Island, 800 deer share their space with 550 ewes. 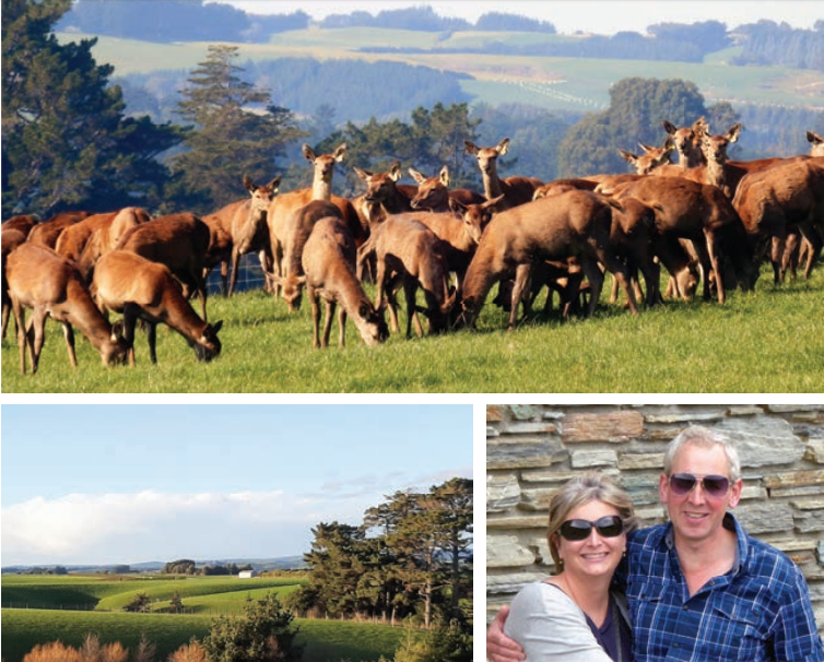 “They have different feed needs at different times of year,” explains John, “which means you can make the most of your paddocks. Plus some paddocks are a bit wet for deer, or a bit steep but fine for the sheep.” The Somerville’s deer herd has come a long way since those first animals bought as live captives from hunters back in the day.

A key income stream since the late 80’s comes from the sale of two-year-old stags, originally in Invercargill, then from 1991 in a selling complex John’s father built on the home farm.

The shared interest in sire stags has maintained over the years with the stud soon to hold its 29th annual deer sale. As current President of the New Zealand Deer Farmers Association John is passionate about the industry and its future.

For many years he’s enjoyed the rewards of careful breeding with good, clean, heavy velvet, good growth rates and good temperament. Now he’s also starting to get satisfaction from the money he’s put into the environment over the years. “Fencing out the waterways, riparian plantings, planting trees and so on.

It’s probably taken 20 years to do it even though the people writing the rules think you can do in about three, but it’s very satisfying to see the plantings get bigger and the water clearing, and it adds to the aesthetics of the farm. I get a lot out of what I’ve done.

Farmers are really problem solvers and I like getting my head around the impacts and nutting out some good ideas to improve things environmentally without breaking the bank.”