When Hawke’s Bay farmer Adrian Arnold was a young man he wanted to work on a number of different properties learning everything he could before returning to the family farm.

Now son Jamie, 21, who is currently working as a shepherd on a local station, is doing exactly the same thing.

“I was always keen to keep moving jobs so I could learn as much as possible. You learn from the things they do right as well as the mistakes they make,” says Adrian.

The family farm is located in Kaiwaka, 30 minutes north of Napier. Adrian is the fourth generation to live on the farm, which originally came into family ownership in 1930.

Today Adrian and wife Kim are the sole owners and complete most of the work on the farm themselves, complemented by a staff member three times a week.

Adrian, who has held a number of high profile roles in the industry over the years including most recently Meat + Wool chair of Federated Farmers, says future proofing his farm is a priority at present.

They are looking at breeding their own replacements rather than buying them in to make the farm more self-contained, important after scares such as mycoplasma bovis.

They are purchasing angus heifers and when they get enough pure bred black cattle on the ground will look at what sires to use.

Adrian says the choice will most likely be based on maximising hybrid vigour and perhaps tap into the angus premium market.

He says they are always seeking to improve their operation and he finds his role for the past four years judging the NZ Ewe Hogget Competition has provided plenty of inspiration.

“I see the top sheep across all breeds. This really challenges what we are doing and how we could do better.”

This has led Adrian and Kim to drop ewe and hogget numbers and increase cattle numbers with the aim of improving pasture, particularly important as the farm is not cultivated and grows a lot of native species.

“This stock number mix helps us to control the pasture better. Sheep eat into the crown of the pasture while cows don’t eat it down so low.

We push cattle into the steep hill ridges with the aid of a hot wire to clean up the roughage, over winter/early spring.

By eating the rough stalk and seed head it opens the grass up so rye grass and clover has a chance to multiply with better access to the sun.

“This has improved the pasture in the steep ridges and parts of the property cows and sheep don’t naturally want to graze.

This in turn improved the condition of the ewes at lambing, which has meant lambs in better condition when we wean them. The result has been an increase in lamb weight gain when they head off the property.

In fact this current season the average is just over 19 kilograms.”Another change the couple are considering is to offset challenges around the price of wool versus shearing costs.

They think introducing a different breed to fine up their wool could bring benefits but this has to be weighed up against coarser crossbred wool providing extra weight in the bale.

It is also countered by the fact that breeds capable of achieving the finer wool are often more susceptible to conditions such as facial eczema . 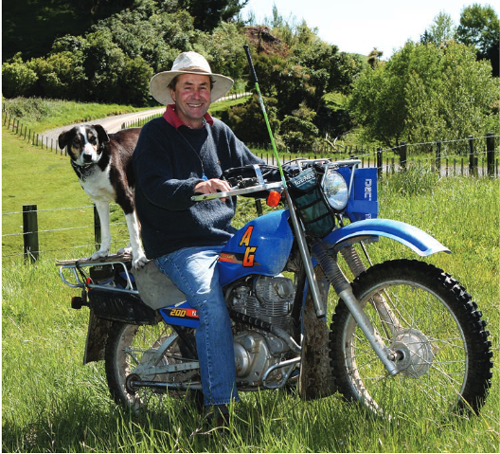 Adrian on a farm beat

Adrian and Kim, who won the New Zealand national NZ Ewe Hogget Competition in 2005 and in 2008 were named Hawke’s Bay Farmer of the Year, are hopeful that the current swing away from plastics might eventually filter through to the wool market as the public starts to move away from synthetic fibres.

“Synthetics cause the same damage to the environment as any other plastic so maybe the public will start to see wool as the natural product that it is that breaks down,” says Adrian.

“It could give the wool industry the injection it requires.”