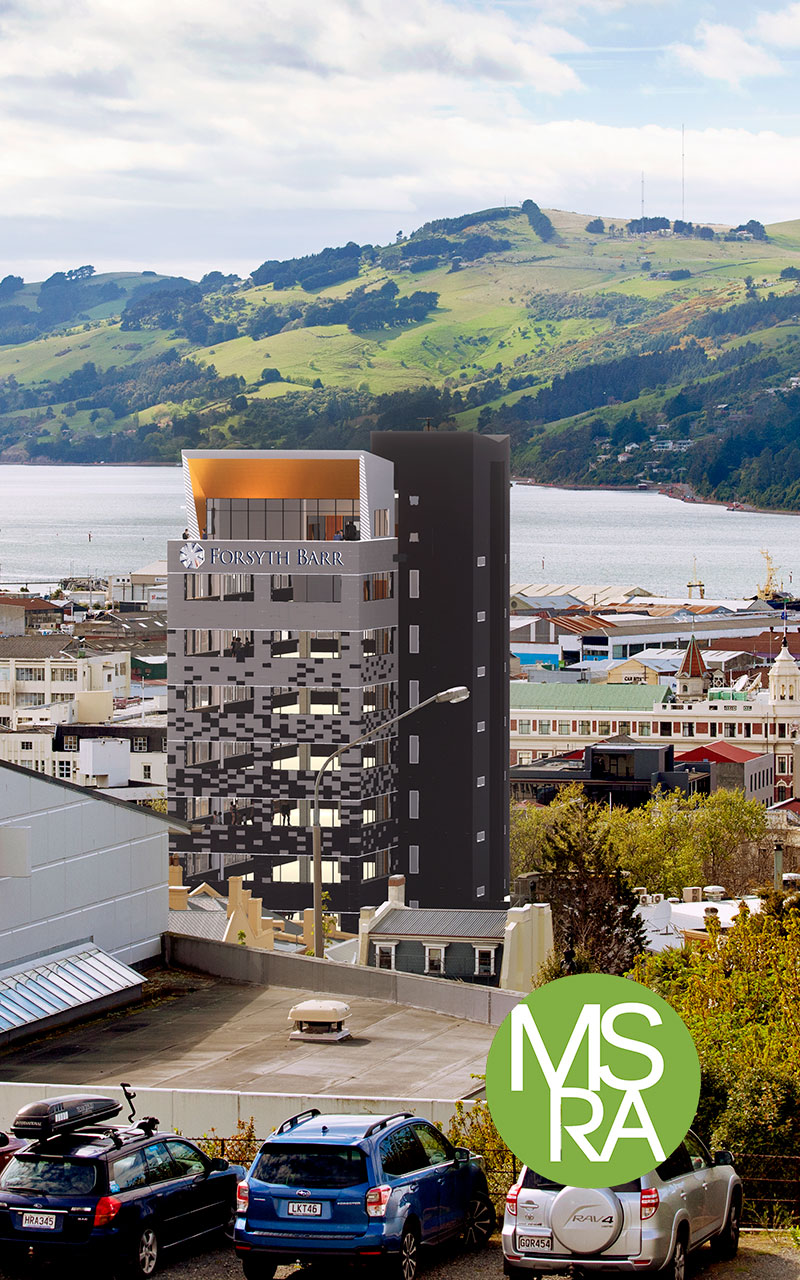 The bold and brave redevelopment of Dunedin’s Forsyth Barr House is a melding of visionary minds, managing director Neil Paviour-Smith says.
In June last year Forsyth Barr moved out of the Octagon to temporary premises in the nearby historic former National Bank of New Zealand building in Princes Street to allow work to begin on the much needed redevelopment of Forsyth Barr House.
The project is being undertaken by Dunedin-based property investors Leonard Holdings, partly owned by Chris Barnes who is also a director of ADL Properties which specialises in refurbishing quality, well-located office and industrial buildings.
Dunedin architect Craig McAuliffe of McAuliffe Stevens was tasked with modernising Forsyth Barr House, built in 1968.
Neil Paviour-Smith said the decision by the company’s management to stay in the Octagon was significantly influenced by Chris Barnes’ vision for the building, combined with his track record in other developments in the city.
“We were confident that he was going to deliver a really top quality redeveloped building that meant that we would be willing to enter into a long-term commitment to staying in the building once it was completed.”
It its existing form, Forsyth Barr House was inadequate for the company’s long-term needs, from heating and ventilation and other infrastructure, configuration of access and lifts to staff and client amenities while providing a modern and pleasant working environment.
The redevelopment comprises gutting the building to a shell, recladding, orienting its entranceway to the Octagon and adding a level.
This structural work is being complemented with a top quality fit-out.
“We can move back in later this year and we are very excited about that.”
Forsyth Barr will occupy the top four floors of the new building which will provide space for about 100 people; the company employs about 90 staff in Dunedin.
Chris Barnes is the project manager for Forsyth Barr House’s base build and fit-out.
When the building was put up for sale, Chris took it on as a challenge which he subsequently took to Craig McAuliffe.
Craig’s initial brief to him was “do some interesting things” resulting in what Chris calls a brave design.
“I’ve done a number of buildings with Craig and we’ve done some pretty interesting things on three of them now and the city can withstand some modern architecture and I personally believe that modern can fit beside historic and complement it.”
“[For Forsyth Barr House] he created a design around a system of tiles of tiles to go on the outside of the building that represent the cladded sandstone effect of the municipal chambers in St Pauls cathedral next door,” says Chris.
The top floor will be constructed behind a skin of aluminium and copper cladding which will be a significant visual feature from various heights and angles from surrounding streets.
Key to the project is to bring the building into the 21st century in terms of its aesthetics, performance and energy efficiency.
“We’ve reglazed and replaced all of the window frames in the building with high-performance glass, we’ve installed new lifts, redeveloped all the foyers, toilets, stairwells, electrical systems and water systems.”
Chris believes that once completed, Forsyth Barr House will probably be one of the most modern buildings in Dunedin.
His focus is to buy and develop fundamentally sound buildings in good locations “and then do something outstanding with them.”
There is good demand for modern, quality commercial buildings in Dunedin.
A key part of the success of the developments Chris has been involved in is an experienced and loyal contractor base which he and his fellow directors have collaborated with for 18 years.
“Dunedin is blessed with a very good base of contractors that have a can-do attitude and there is a large amount of team pride.”
© Waterford Press Ltd 2021 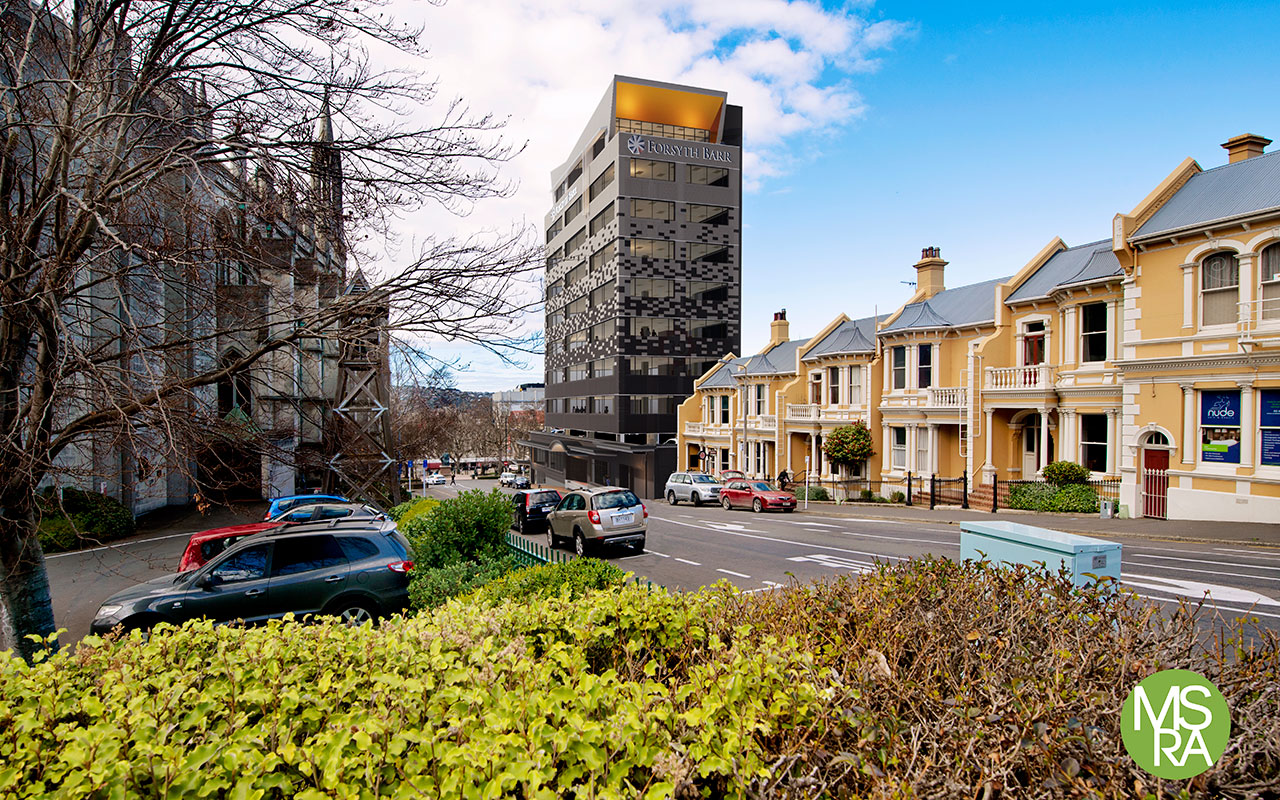 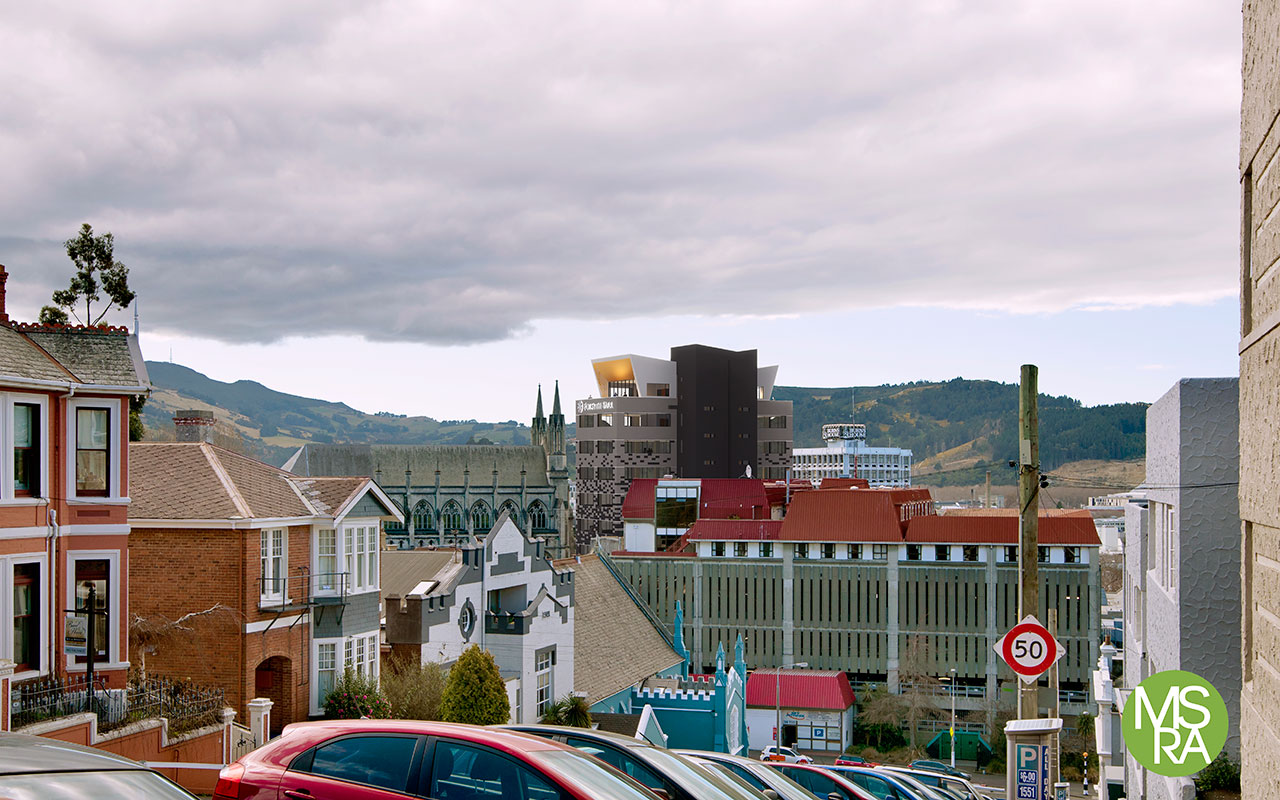