Boat firm riding the crest of a wave

Commercial boats under construction at Osprey’s Stoke factory in Nelson.

Riding the crest of a wave with a steady stream of orders flowing in for new boats, Nelson boat manufacturer Osprey Boats Ltd is one of New Zealand’s proud success stories.

Initially working from a 6m x 6m garage at his home whilst raising two children as a solo parent, Lloyd soon needed to employ staff to keep up with the demand.

While involved in the mussel industry, requests were made by farmers to produce soft riding stable boats to service the aquaculture farms in Marlborough Sounds.

“There was a well-known boat builder from my childhood called Frank Pelin,” says Lloyd. “He was renowned as being one of the top boat builders back then and the very first boat that we did was based on his angles for the hull, deadrise and bow.”

Experienced boat building staff were employed, new designs, jigs and patterns developed and a marketing contract with a prominent marine outlet was the birth of the Osprey era.

The second boat built was the beginning of a long relationship with Abel Tasman Aquataxi which is still strong to this day.

Now with 30 different models and options to choose from, Osprey aluminium pontoon boats have been purchased by such diverse groups as conservation departments, harbour boards and adventure tourism companies, both within New Zealand and abroad and have become increasingly popular in the recreational market.

Operating out of Stoke, about 5 kilometres from Nelson City Centre, Osprey Boats typicaly custom manufactures between 25 and 40 boats each year.

“At the moment we’re doing a lot of big commercial boats which take ages so we might be down to 10 – 12 this year,” says Lloyd. “We were getting 10 enquiries and 2 orders a week—that happened for months. Half the people didn’t even ask the price— they just wanted them.” 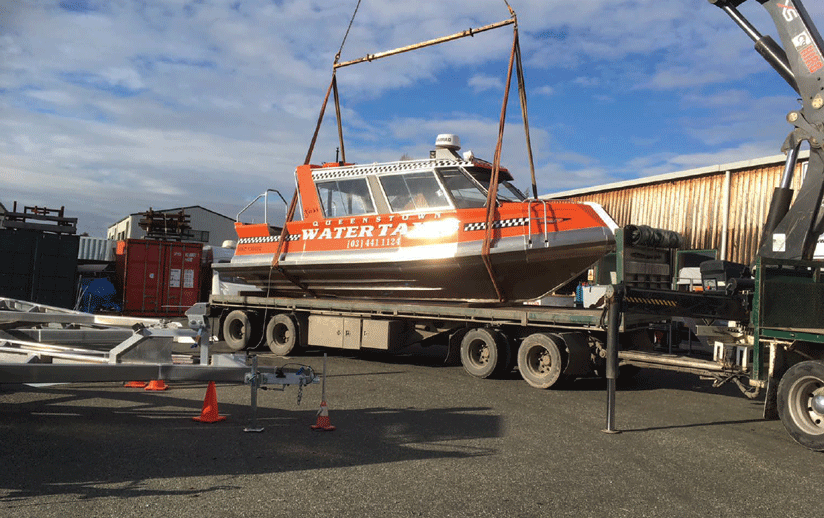 Osprey aluminium pontoon boats have been purchased by such diverse groups as conservation departments, harbour boards and adventure tourism companies.

Lloyd believes the continued demand for the boats comes down to their reputation for providing a very stable, comfortable ride on the water.

Many customers tell Lloyd they have been on a ride on an Osprey Boat in the Abel Tasman or Stewart Island and just want one.

“A young lady from Dunedin was exploring options to set up a nature watch company and had heard a lot about Osprey Boats. She visited Stewart Island where Rakiura Charters operate two Osprey hardtops, site seeing, taxi & fishing charters. She also went to Queenstown and travelled on Ta Kara as well as contacting Abel Tasman Aqua Taxi.

After all positive feedback she travelled to Nelson to discuss her plans and has now placed an order for a new Osprey 880HT x 2800Wide which will be commissioned in September.”

So what is it about an Osprey Boats that makes it special? “The design of our boats means they cut through the water a lot finer, with less pounding – there’s a safer, softer ride and not a lot of spray. All angles in the hull design are perfect so there’s no broaching when the craft goes down a wave. You can virtually let go of the steering wheel and they’ll keep going straight.”

And they are customizable. Lloyd says that virtually every boat leaving the workshop has been customized to meet the owner’s needs.

“We start off with the basic design which is the hull, cabin or sides – we don’t compromise on the buoyancy or safety aspect.

“Then we meet with the owner and discuss their specific requirements, which could be as simple as a fishing rod holder.”

Innovation is another key to the business’ success and Lloyd says that over the years the boats design has been adapted, modified, evolved and refined so that everything gets better. Lloyd is also a positive thinker and welcomes ideas from others.

“We encourage all our team here to build a boat in their spare time and they all go out and come back with ideas that may make a difference. We always listen to them, putting some of the ideas into practice.”