New Zealand’s first fleet of electric doubledecker buses – believed to be the first full electric double deckers in the world with others to date being hybrid – is meeting its target kilometres and reducing the environmental impact of daily travel for commuters since being launched in Wellington in July last year.

Constructed in Tauranga by Kiwi Bus Builders for Tranzit Group, the 10 buses are equipped with lithium ion-based battery technology from Microvast, while their chassis components were supplied by China-based company CRRC/TEG.

Kiwi Bus Builders sales manager Brendon Heapy says this project has been two years in the making, but two years ago it was still deemed probable not possible.

“The technology has only just caught up,” he says. “There have been up to 15 Chinese trips over two years between us and Tranzit to get things underway.”

The battery storage required to run a double- decker bus is a different level of technology from a car battery. Batteries need to charge fast, exert a lot of power, then be ready for another charge. “And batteries are expensive,” Brendon says.

“There can be anything up to $250,000 worth of batteries in a vehicle, and the bus route has to be planned to suit their range.” The buses are equipped with a fast charging system, with charging infrastructure provided by Heliox.

Brendon says an innovative aspect to the charge network combines the CCS plug-in system for depot charging with a roof-mounted pantograph system which can to charge the double deckers on route.

The charging infrastructure initially covers nine bus routes which run between the suburbs of Island Bay and Churton Park.

“On a double-decker, the physical dimensions of the vehicle are very different,” Brendon says. “The double-deckers are very short, designed for maximum loading with a minimum footprint on the road.”

Wellington’s steep and winding roads were a big consideration in the bus design, and Brendon says says being short – with a short front and rear overhang – they are getting around corners with ease. 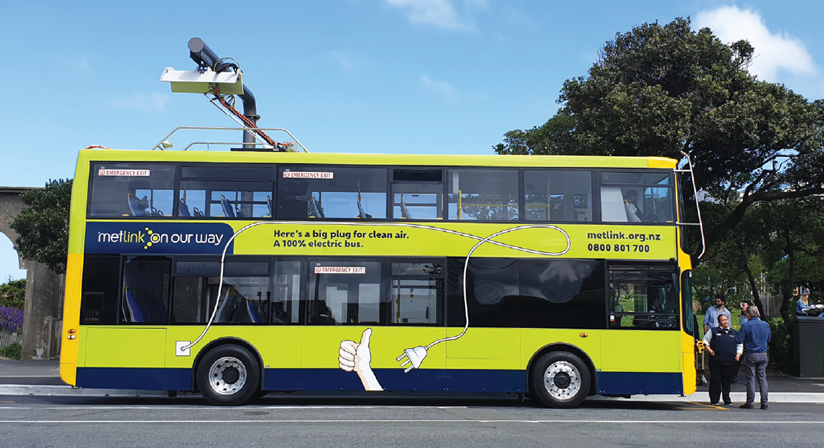 The Tranzit Group double-deckers can also be charged up “on route” through an innovative roof-mounted pantograph system.

The buses have 68 seats, 23 more than a standard single-decker across a longer footprint, and room for another 16 standing passengers.

They can travel up to 150km on a single overnight depot charging. Brendon says the buses met their target kilometres of 10,000km in November, and a higher target for December. “And Tranzit is loving their reliability. EVs are proving to be very reliable.”

Brendon says this project shows what the future is going to look like, with EVs making up a larger part of urban transport even in the next couple of years. Batteries are advancing and becoming cheaper, smaller, and better as each year goes by.

“The next lot of double-decker buses we build will have a different set of batteries, they will be smaller, run longer, and charge faster.

“In the next couple of years, we could see almost no price difference between a diesel and an electric bus.”

Kiwi Bus Builders still has diesel vehicles to build, including the coaches that run 600km each day in isolated locations.

However engine manufacturers are now looking less at the development of fossil fuelled engines and more at hybrid, full electric, and alternative fuels like hydrogen.

Ongoing process efficiencies and innovations, and careful evolution of its processes and practices, continue to place Kiwi Bus Builders well beyond the industry norm.

“For the betterment of our buses and the enjoyment of our many thankful customers, we remain at the leading edge of bus technology.”