Lake and mountain views, native bush walks and ﬁtness trails are part of the new Seven Oaks subdivision at Kinloch.

It’s a project Bruce says will bring enormous beneﬁts, not only to those eventually living in the settlement but to the wider community.

“We’re going to really lift the bar up on extra environmental beneﬁts with signiﬁcant native planting and development of a network of ﬁtness, walking, biking trails as well.”

The land, part of an original sheep/beef station purchased in 1953 by former Prime Minister Sir Keith Holyoake and Ian Gibbs carries a huge history in the district.

It was always their vision to see a lakeside village arise on part of the land. When Sir Keith passed away, a portion of the remaining land was given to each of his four children.

Where Seven Oaks is situated was owned by daughter Dianne Comber. When she decided it was the right time to sell her block she contacted Bruce who could see the area’s potential.

“Phil and I put a tender offer in having visited the site a couple of times and were fortunately successful. “We both think this is a very special plot of land, in part because it is almost completely bordered by DOC reserve. It sits on a plateau above and to the west of Kinloch township,” says Bruce.

Title to the ﬁrst stage of 29 sections, spread over 4.3 hectares will be through in about 18 months and Phil says there is already signiﬁcant interest from the market for sections.

“I think one of the strong appeals is the surrounding bush reserve which also has part of the New Zealand national cycleway running through it near the lake edge. It will be just a two-minute walk from the section sites through to the lake itself,” says Phil.

When Business North Central spoke with Phil and Bruce stage one of the project was about to be lodged for consent by council and both were conﬁ dent that construction of the subdivision would get underway by the end of the year.

Of the 29 available sections, 12 have sold; not surprising given the block of land is the last one next to the Lake that could be developed into housing.

Given this variety in size and value the settlement is expected to attract a diverse range of permanent, holidaying, semi-retired and retired residents. 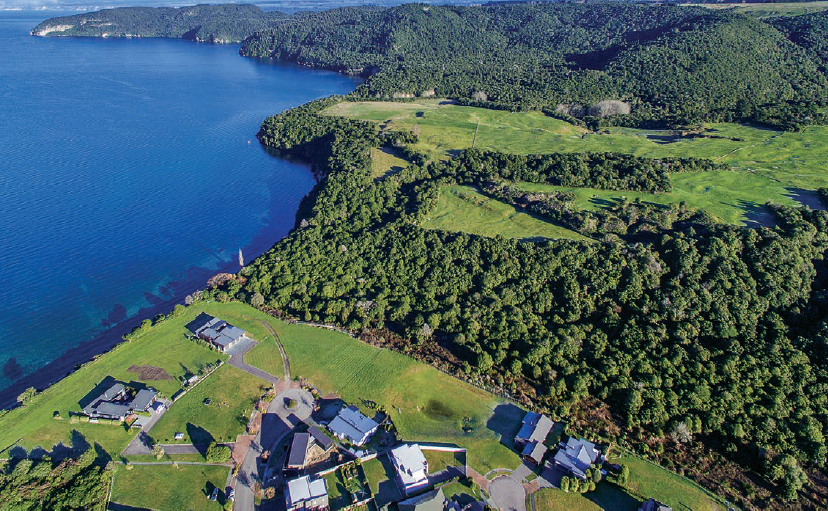 Stage one of the Seven Oaks development in Kinloch includes 29 sections ranging in size from 800 square metres to 1148sqm. The subdivision, overlooking Lake Taupo, is surrounded by a bush reserve.

This ﬁrst stage, is part of a much greater vision for the whole block of land. Bruce says once Seven Oaks Stage one is completed the intention is to evolve a total development plan for the remainder of the block.

Phil says that while from an engineering perspective the project is quite straight forward, from an environmental one it is presenting with exciting challenges.

“It’s not a cookie-cutter process at all in setting out the sections and we’re putting a huge amount of attention into enhancing this pristine and very special site for future generations to enjoy,” he says.

Even the name, Seven Oaks, reﬂects the land’s heritage. It was the name the Holyoake family gave to the area.

Bruce has long-standing connections with the district, having been behind other land development projects including the 253-lot Loch Eagles subdivision on an elevated site to the east of Kinloch town.

Phil has been involved in land development projects for 30 years throughout many parts of New Zealand. He says he gets great satisfaction at returning to some of these projects many years later to ﬁnd a whole community has evolved from what was once bare land.

“I want to create spaces that I’m proud of and Seven Oaks is certainly that.”

• A video and site information map is available by accessing the website at www.sevenoakskinloch.com and the sections are being marketed through Bayleys Taupo.