Veteran wine critic Raymond Chan named them his 2018 “Winery of the Year”, and their winemaker Dom Maxwell was named New Zealand’s 2018 “Winemaker of the Year” by leading wine publication “Gourmet Traveller Wine”.

The 33-hectare vineyard in the Waipara Valley is no stranger to winning awards having twice won International Decanter Trophies for best Pinot Noir, been named New Zealand Organic Vineyard of the Year and won the Air NZ trophy for best Riesling and best Pinot Noir.

All this since their winemaker Dom Maxwell, and viticulturist and general manager Nick Gill, planted the vineyard together in 2004 with Greystone now processing approximately 400 tonnes in their certiﬁed organic winery.

Owned by the Thomas family the name Greystone comes from the limestone bedrock on which the vines were planted. The family’s goal from the start was to realise exceptional wines from the unique “terroir”.

It’s a French word which translates literally as “soil” but with respect to wine has come to imply all the different contributing factors to the grapes such as the climate, the weather, or the aspect of the vines.

Knowing that Pinot Noir grapes love limestone a variety of clones, aspects and blocks were planted to see what the bare land was capable of producing.

As the Pinot Noir planted soil and slopes of the Teviotdale hills give way to the ﬂatter land of Waipara the grapes change through Chardonnay and Riesling to Gewürztraminer, Pinot Gris and Sauvignon Blanc.

Many of these have won awards in their own right but it’s the work he’s been doing with the Pinot Noir grape that this year brought Dom Maxwell some well-deserved recognition.

“They chose Dom as winemaker of the year because he’s carving a new path for winemaking in New Zealand. He’s got lots of experience both here and overseas but he stands out because he’s experimenting with fermenting the grapes in the vineyard which is not done anywhere else in the world to this scale,” says Greystone’s Market Development Manager Alissa Miller.

“We get the most incredible wines as a result, which are very reﬂective of our terroir,” Alissa says. Dom Maxwell ‘s technique involves hand bucketing the grapes into small vessels scattered throughout the vineyard. The vessels are covered and left there to ferment.

“We’ve been experimenting with large-scale vineyard fermentations since 2012. The goal is to make a wine that is truly expressive of its origin as well as being reﬂective of the vintage.

“We know that once grapes come off the vine and into the winery, they’re exposed to a new yeast population cultured from within the winery. We wanted to eliminate the exposure to foreign yeast and ensure only native yeasts from our vineyard are involved with the fermentation.

“Along with capturing the wild yeasts in situ, the 2016 Vineyard Ferment Pinot Noir also reﬂects how the vagaries of the season’s weather affects the wine. The fermentation vessels are exposed to the weather elements rather than having the protection of a temperature controlled winery building.

“So in effect we are extending the vintage inﬂuence rather than it stopping the moment the grapes enter the cellar. In addition we have seen lower alcohol than in the corresponding cellar ferments, regardless of the vintage.”

There was so much interest in Maxwell’s work of wild and vineyard fermentation that, instead of blending all of the resulting wine into their award-winning estate Pinot Noir, in 2018 Greystone decided to release a standalone “Vineyard Ferment” with allocations taken in advance from their current distributors around the world.

It sold out in just eight weeks. Making exceptional wine is not the only thing that brought Greystone to the attention of travellers around the world.

Sitting inconspicously in a private location above their vineyard is one of four “PurePods” scattered around Canterbury, with theirs having been showcased on Australia’s long running travel show “Getaway”.

The PurePods construction is designed to be minimally invasive on the land it’s constructed on, powered by solar-panels, backed up with a bio-fuel capable water heater. 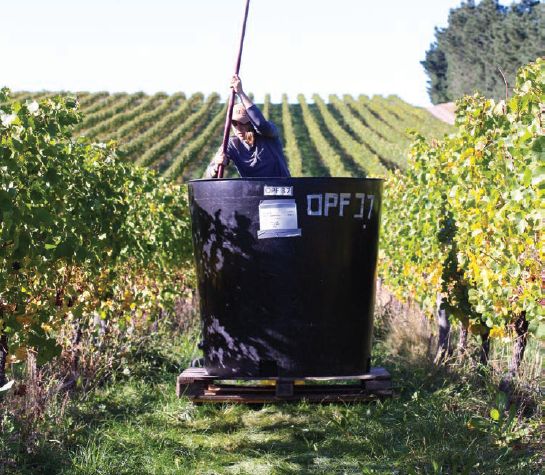 Greystones Wines is experimenting with vineyard ferementation of its grapes, which has resulted in some outstanding wines.

As Greystone general manager Nick Gill says “North Canterbury offers an incredible range of world-class food, wine and accommodation, much of which are off the beaten track.”

The PurePods take it one step further. They’re all remote, sustainable yet luxurious eco-cabins made almost entirely of glass.

The resulting dreamlike ambience is intended to give the guests an unusually immersive nature experience. They’re fast becoming a favourite with local and international visitors alike.

Tags:
Previous Article
Experience to the fore in hospital project
Next Article
Biogas system starting to pay its way