The original grand two-storey building in Christchurch’s Julius Terrace, is thought to have been built in 1913.

Accurate architectural detailing and selecting craftsmen skilled in the old ways of building have been the keys to success in replicating a grand Edwardian home lost to the Christchurch earthquakes.

Stephen Crooks, director of specialist residential architectural practice, Chaplin Crooks Architects Ltd says it’s easy to try to copy something and get it wrong so that it really resembles a modern building that just tries hard to look like the genuine article.

“The craftsmen that we’re using actually know how to do it well and the building looks exactly like the genuine article. People cannot believe it’s a new house – most people think it’s a repair. The owner is absolutely rapt in the home – he cannot believe how good it is.”

The original grand two-storey building spanning 420sqm in Christchurch’s Julius Terrace, is thought to have been built in 1913 as a builders own home. Research undertaken by Stephen suggests the builder was in his mid 20’s at the time, recently married and perhaps built the home as the matrimonial nest.

While Stephen refers to the building as Edwardian in style, there is in fact an eclectic mix of Victorian, Edwardian, Arts & Crafts and Art Deco -styles that span some 30 years.

When earthquake struck in 2010, the building suffered signiﬁcant damage to the lower level which was constructed from triple brick. The upper timber framed level was largely unscathed.

When the insurers decided the building was not viable to repair, Steve Brown Builders Ltd was engaged to price a rebuild. “Steve quickly realised that it was not an easy task to price without detailed construction drawings,” says Stephen.

“We’ve built a strong working relationship with Steve over the last 30 years. “After convincing the insurer of the need for drawings we were engaged.”

As the house was still standing, the architectual ﬁrm was able to undertake measurements, record details and sizes, and take photographs. “We took hundreds of photographs and measured every little detail—all the timber moldings and things like that.

“From the original house we were able to work our way backwards and come up with detailed construction drawings using modern construction methods. The basic footprint and sizes remained the same.” 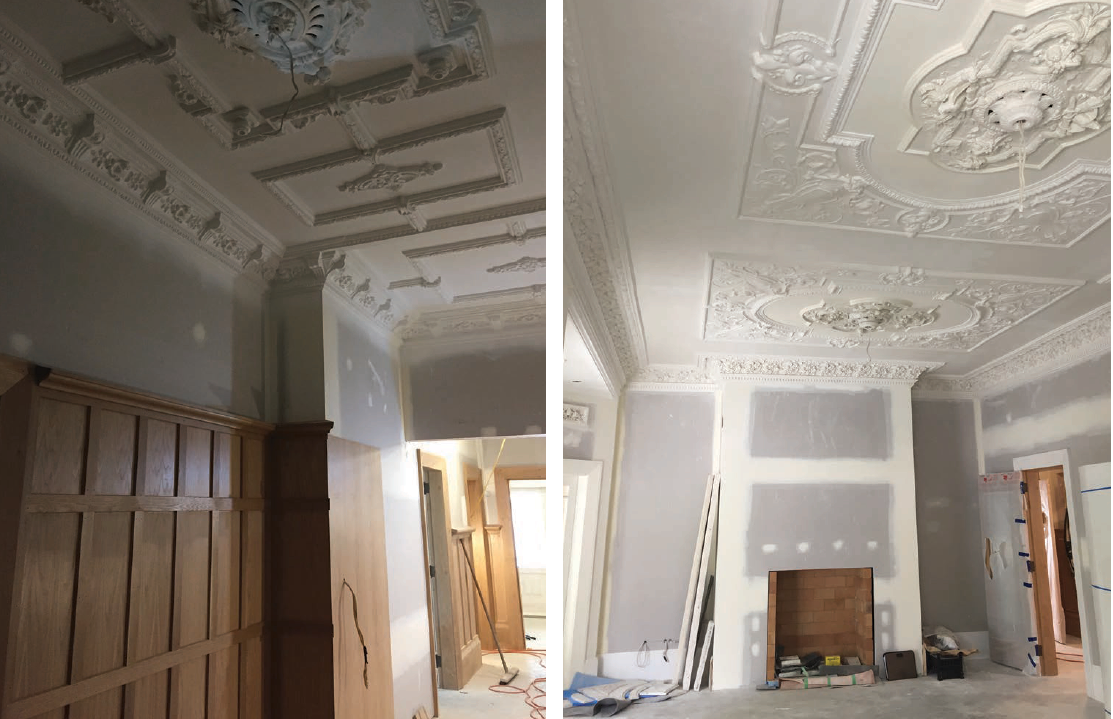 The house features an eclectic mix of Victorian, Edwardian, Arts & Crafts and Art Deco – styles that span some 30 years. Below, beautiful leadlight windows were salvaged from the original home, removed from their frames, cleaned up and put into double glazing.

The construction drawings enabled Steve Brown and his team of sub contractors to take the time to detail a price to replicate the building on a like-forlike basis. When the insurer made the decision to cash settle, the English born owner of the home and lover of grand old architecture just wanted his house back – his brief to the architect was that simple -‘I want my house back.’

Construction of the home started in April of 2017 and is expected to be completed in April this year.

Red brick from Canterbury Clay Bricks in Darﬁeld is the predominant exterior cladding with Oamaru stone used for the quoining, banding, sills and lintels over the windows.

An experienced English stone mason was engaged to lay the veneer. The upper level is clad in a ﬁne textured plaster render.

“The Oamaru stone is quite carved with a nice shape to it. Again there’s quite a skill involved in carving the stone to the correct shapes. The roof is a clay Marseille tile—sourced from Australia.

“The ﬂooring is predominantly carpet but we’re also using a lot of tessellated tiles with lots of ﬁne
geometric designs and patterns.”

Perhaps the pièce de résistance is beautiful leadlight windows salvaged from the original home, removed from their frames, cleaned up and put into double glazing. “The project has gone just so incredibly well— it’s just amazing,” says Stephen.

“It would be one of the smoothest projects we’ve ever been involved in and a lot of that comes down to a really good set of construction drawings to work from. And Steve Brown has got the right people on the job. Everyone is loving working on the project and everyone is taking pride in what they are doing.”

Tags:
Previous Article
The ABC principle in action
Next Article
The biggest project in zoo’s history