R & R Spreading’s consistent growth year-onyear is the result of a focus on excellence in all areas of its operation, reinforced by an extremely stable workforce, director Ben Smith says.

“I would say the business is growing 15 to 20 per cent a year; we’ve just put on another truck this year. Every second year we are adding to our fleet and I can see that there’s room for more growth.”

Ben and his wife Lucy are in partnership with Ben’s parent’s Ron and Ally Smith, having bought into the company, which was established in 1999, in 2016. Originally a full rural transport business, about 2012 it was decided to concentrate solely on fertiliser spreading.

“Dad wanted to semi-retire and it was going to be left for me to run. I could see our future being a lot stronger in the fertiliser industry, that everybody needs fertiliser, whereas in Methven there’s a lot of general cartage contractors fighting for work,” he says.

With the knowledge and experience he gained in fertiliser spreading while working with his father, specialising in this area made the most sense. “A few more years down the track it’s proved it was, going from four spreaders now to 13.”

“We are probably one of the only businesses around that specialise in fertiliser application. Be cause we are, I think that’s our biggest strength.”

The company now partners with in excess of 250 properties and has been able to meet this demand by constantly investing in its staff, its fleet and by embracing the very latest technology.

In order for farmers and irrigation companies to calculate nutrient budgets and to comply with increasingly stringent environmental regulations, proof of placement of fertiliser has become a major part of R & R Spreading’s every day operation, requiring a considerable investment.

Its fleet of spreaders are fitted GPS tracking systems which document their daily movement and the exact location and timing of when fertiliser is applied. It enables custom formulated fertiliser to be applied to specific areas of a farm which have varying soil types and nutrient needs.

“Our technology partners, Precision Farming, securely store this data which is available on demand from them.”

R & R Spreading’s dedication to excellence is further backed by membership in the New Zealand Groundspread Fertiliser Association (NZGFA) and by being Spreadmark Certifi ed.

During the off-season staff attend driver training courses facilitated by the NZGFA.

In addition to training and compliance, the company’s commitment to its drivers includes paying them “very, very well” which is both an investment in the company and it’s clients.

The longevity of staff creates many efficiencies in spreading on farms; clients deal with one driver which eliminates the need to repeat information, the drivers are familiar with the layout of each farm and their knowledge can avoid potential mistakes being made.

“We look after our staff and in turn they look after us. We’ve put in a lot of time and effort to get them and the equipment they operate compliant.” Another service added more recently is pivot irrigator rut filling.

“With the never ending maintenance needed on trucks from the damage caused by pivot ruts and the growing demand of farmers needing someone to fill their ruts for them, we have invested in our own tractor and rut filler which we hire out and try to utilise during the quiet winter months with one of our drivers.” 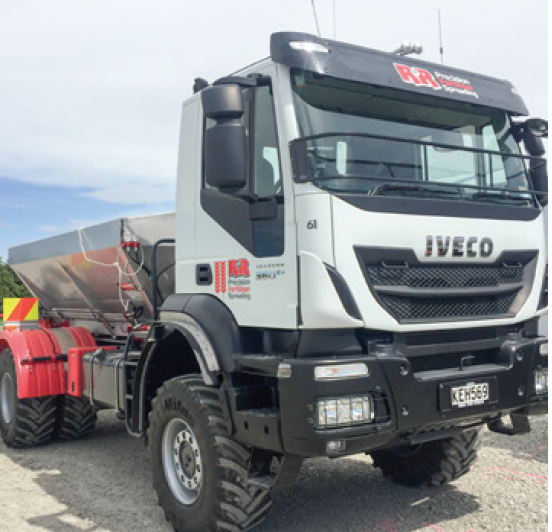 R&R Spreading specialises in fertiliser application. With business growing at around 20 per year the company has just added a new truck to its fleet.

The ongoing growth of the company created a need for a new $1.5 million premises, which includes a new office building, a staff room and a well equipped 670 square metre workshop, completed 18 months ago.

The layout of the new buildings has resulted in less down-time and a more pleasant working environment.

In a nod to the company’s desire to be known for its excellence, Ben says a well landscaped site was important to create a good impression, particularly as R & R Spreading is the first building seen when driving west along Line Rd into Methven.

“Our reputation is pretty important so there was no expense spared.”