The facade of the original Ellerslie totaliser machine, designed by Sir George Julius in 1913 to keep a record of the total amount bet on each horse, has been restored and now takes centre stage.

A $6 million revamp of the Ellerslie racetrack’s stables, completed by commercial construction specialist Haydn & Rollett for Auckland Racing Club, is set to cement the historic racecourse as a world-class racing destination, and put its facilities on par with the famous Australian courses Flemington and Randwick.

Work on site began in March and started with the demolition of most of the existing indoor stable area, which has been replaced by tie-up outdoor stalls for 126 horses alongside a warm-up ring, veterinary boxes and ofﬁce, a function room, and a trainers’ café.

The conﬁguration of the tie-up stalls have allowed visitors to the track to see more of the horses before and after racing, and gain a greater sense of the energy and passion behind thoroughbred horse racing.

After only nine months of construction, the project was completed and handed over before Ellerslie’s ﬁrst race day of the season on Saturday, October 27.

Haydn & Rollett general manager Craig McGuigan says key to working to a compressed time frame is organising the work on the ground, opening up multiple work spaces and opportunities to get the workers through each job as soon as possible.

“For us, it’s a real achievement to get it over the line,” he says. “We came across several issues with ground conditions and asbestos, which made it even more challenging and cost us a month of construction, so we are proud to get a project of this value over the line in what was a really compressed time frame.”

The Ellerslie racecourse has operated since 1857, and is one of the oldest in New Zealand. In a nod to its past, the build has been ﬁnished in the same red brick seen in the current, 1930’s administration building.

The facade of the original totaliser machine, designed by Sir George Julius in 1913 to keep a record of the total amount bet on each horse, has been restored and now takes centre stage.

“The totaliser machine is the centre piece of the whole project,” Craig says. “The facade was salvaged and was taken down to Wellington to specialist metal restoration and conservationist The Heavy Metal Company. 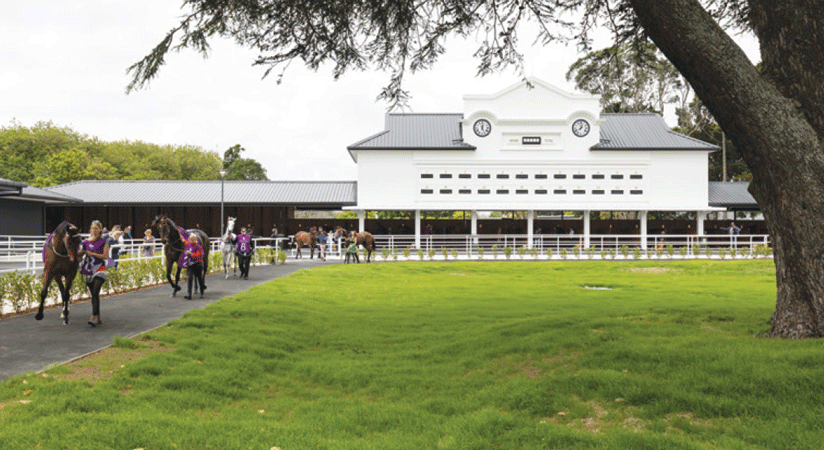 The Ellerslie racecourse has operated since 1857, and is one of the oldest in New Zealand.

“They are real craftspeople and have brought the totaliser machine back to life. It was brown when we sent it down, as it has been painted over the years, and we have since brought it back to its original colour of white.”

The totaliser machine now sits on a steel framed timber structure with a timber truss roof, and clad with timber weatherboard and plaster. “It’s a big structure and quite magniﬁ cent, at about 12m up in the air,” Craig says.

“Sitting where the original totaliser machine sat, as a centrepiece for the day stable area, it adds a completely new and historic element to the track.

“It’s purely for aesthetics as it’s not functional, but what it does have is two analogue clocks which are both operational, one showing the current time and one showing the time of the next race.”

The project was designed by Auckland architects Young & Richards, with Haydn & Rollett providing a turn-key operation, managing the design, construction, and then maintenance to keep the structures clean and tidy and to adhere to product warranties.

Both companies have an excellent track record of designing and building multi-use facilities.

For this ﬁrst new build of racing facilities in New Zealand for many years, the principles each contributed to the project have set it on the right track for a top class facility which will support Auckland Racing Club for many years to come.

Haydn & Rollett is an award-winning construction company, currently involved in the development of other notable projects such as the Greenwich Retirement Village and the Okla Apartments.